On the morning of March 29, 1984, the city of Baltimore woke up to the news that its professional football team was gone. 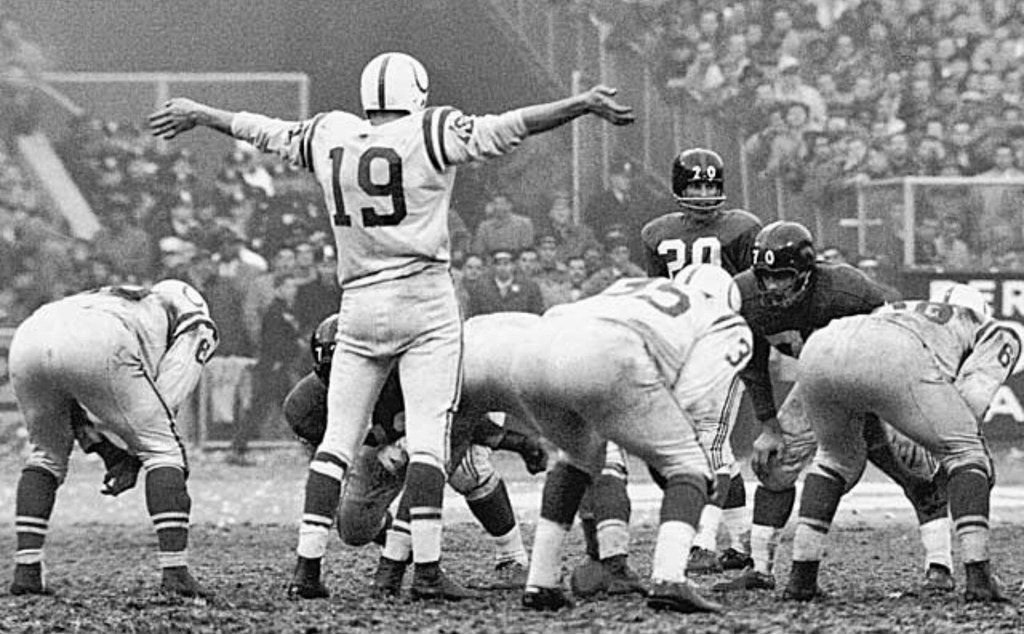 Quarterback Johnny Unitas of the Baltimore Colts calling a play at the 1958 NFL championship, the team's first national title. The deep-rooted franchise would abandon their fans 30 years later for Indianapolis.
Posted Sunday, February 7, 2021 8:00 am

On the morning of March 29, 1984, the city of Baltimore woke up to the news that its professional football team was gone. Under the cover of darkness, the Colts had packed up their equipment and memorabilia into a dozen moving vans and rumbled out of town.

More than 30 years of Colts history came to an abrupt end, leaving their loyal fans bitter and the local politicians incredulous. As it played out, the Colts didn’t just leave Baltimore, they escaped.

For several years, rumors were circulating that the Colts were looking for another home. Their owner, Robert Irsay, a feisty and combative businessman who bought the team in 1972, was reportedly dangling the franchise to growing metropolitan areas such as Phoenix, Memphis, and Jacksonville. But he never committed to any of those locations, nor definitively announced his intention to leave the Mid-Atlantic city.

However, it wasn’t a secret that Irsay was frustrated with local officials who failed on their promises to replace Memorial Field, the Colts’ aging and dilapidated stadium.

Completed in 1954, the venue played host to Baltimore’s football and baseball teams and its antiquated design and outdated seats were called out as early as 1971 when the Colts’ previous owner, Carroll Rosenblum, decided to sell out.

Spending 16 years with the Colts and embodying the spirit of the team, QB Unitas led the gridiron club to 4 national titles.

The white helmets with their distinctive horseshoe emblem won their first NFL championship in 1958 going up against the New York Giants. At Yankee Stadium, in a match that widely became known as the “Greatest Game Ever Played”, Unitas marched his squad 80 yards downfield in overtime to clinch the duel 23-17 with a sudden death, 1-yard touchdown.

The New England Patriots Before the Dynasty

The game’s drama was broadcast by NBC to an estimated 45 million viewers and is credited with greatly increasing the popularity of football beginning in the 1960s. It was the Colts’ overtime performance and the power of television that inspired Texas billionaire Lamar Hunt to launch the AFL, a competing league with 6 football teams that eventually forced a merger with the established NFL.

The Colts went on to defeat the Giants again at the 1959 championship. They wiped out the Cleveland Browns ten years later in 1968 and took down the Dallas Cowboys in Super Bowl V (1970).

When Irsay assumed ownership of the storied franchise, the Colts were already ingrained in football lore. In a tax-driven deal that favored Carroll Rosenblum, Irsay first bought the Los Angeles Rams for $19 million but swapped them for the Colts on the same day with Rosenblum, who moved out west to run his new team.

Part of Irsay’s commitment to the east coast franchise rested on a grand plan nicknamed the “Baltidome”, a $78 million, publicly-funded, multi-sport facility that would hold 70,000 football fans.

But in early 1974 the ambitious project was shot down by both the Maryland Legislature and the Governor. Months later, a local ballot was passed declaring the stadium area a memorial to war veterans and off-limits to any development using city funds.

For the bare-knuckled mid-Westerner who turned a few hundred dollars into a successful heating & cooling business, patience was running out.

In 1980, the Maryland Legislature agreed to float a $23 million bond for stadium renovations but it was contingent upon the Colts signing a 15-year lease. Irsay refused to lock into a long-term contract and signed for just 2 years.

No work on the facility was done and the lease would turn out to be the last one inked between the Baltimore Colts and their city.

On the field, the Colts’ dynastic days were behind them. GM Don Klosterman followed Rosenblum to Los Angeles and Head Coach Don McCafferty and Johnny Unitas were gone after the 1972 season.

With Super Bowl V in the team’s rear-view mirror, the Colts fell into a slump and missed the playoffs for three consecutive years. They ran their last playoff game in Baltimore in 1977, losing the divisional contest to the Oakland Raiders in double overtime.

Irascible and prone to drinking, Irsay also proved to be an unpopular, meddling boss. By 1982, he had gone through several coaches and GMs and his reputation in the NFL was tarnished.

That year, the Colts went 0-8-1 in a strike-shortened season, earning the right to a first pick draft. They selected John Elway, a promising QB out of Stanford. At the advice of his father, Elway refused to play for Baltimore and within a week following the draft, he was traded to the Broncos.

Irsay was now determined to leave Baltimore and he narrowed his choices to sun-soaked Phoenix, or Indianapolis and its rising Hoosier Dome.

He felt confident that the league would approve either decision, since just two years earlier the NFL was burned by an anti-trust lawsuit after they tried unsuccessfully to block Al Davis from moving the Oakland Raiders to Los Angeles.

Officials in Baltimore suddenly got serious and reached out with competing financial sweeteners: a $15 million loan at 6.5%, a guaranty of 43,000 tickets sold per game for 6 years, and the purchase of the team’s Owings Mills training facility for $4 million.

But on March 27, 1984, the Maryland State Senate got overambitious when it passed legislation that would enable Baltimore to seize the Colts through eminent domain.

The next day, Phoenix withdrew its bid on the sanction news and Irsay notified William Hudnut, the Mayor of Indianapolis, that he’s accepting their offer and moving the Colts immediately.

Hudnut called his neighbor and friend, John B. Smith, CEO of the Mayflower Transit company, who sent 12 moving trucks to Owings Mills to help with the move. The trucks arrived at 10 pm on March 28th in the midst of a snowstorm and quickly began loading the Colts’ belongings.

Like thieves in the night, some 45 movers carried off the team’s paraphernalia, from shoulder pads to movie projectors. A half-dozen fraternity brothers from the University of Maryland were also bused to the site to assist with the effort. One ended up packing the Colts’ prized possession, the Vince Lombardy Trophy.

By dawn, the vans were on their way to Indianapolis, taking different routes to avoid Maryland state troopers from potentially stopping the column.

On March 29th, Maryland Governor Harry Hughes signed the eminent domain bill and on March 30th, Baltimore filed an eminent domain suit. But it was too late. The Baltimore Colts were out of reach and they were now rebranded the Indianapolis Colts.

The transplanted team had a new fan base and was poised to start playing in the Hoosier Dome, a brand new $78 million, 58,000-seat stadium with luxury box seats.

Overnight, Irsay had become the hero in one city and the villain in another. Not only did he move the franchise, but he carried away the Baltimore Colts’ legacy. Subsequent lawsuits filed by Baltimore to reclaim the team’s heredity- name, logo, memorabilia- failed.

The Colts had moved on, closing an old chapter and opening a new one.