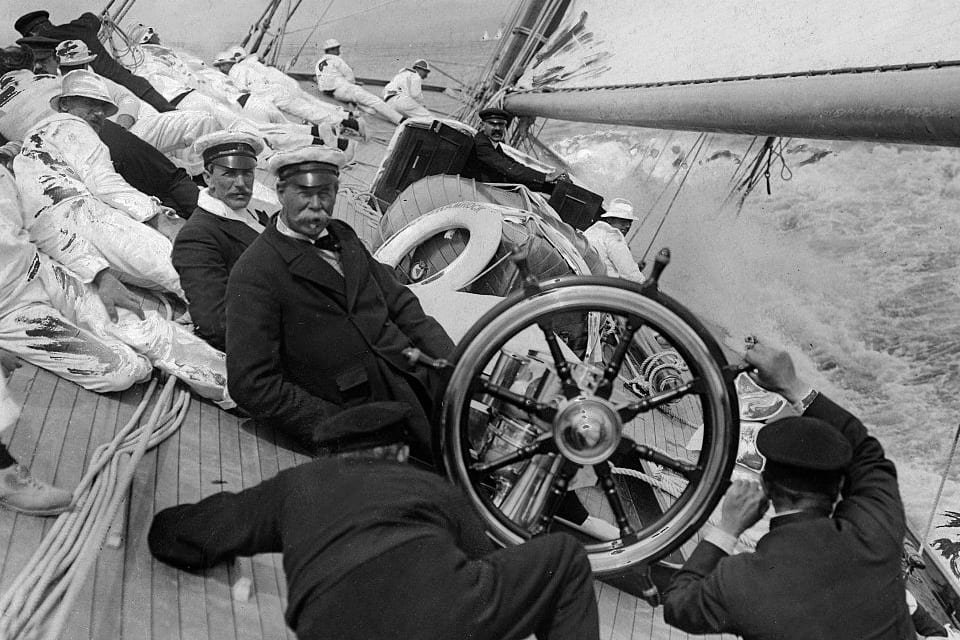 Thomas Lipton aboard one of his racing yachts. An avid sailor, the Irish-Scottish tea tycoon competed 5 times at the America's Cup and lost each challenge. The beloved yachtsman was later awarded with a special cup and declared 'greatest loser'.
Posted Sunday, January 3, 2021 8:00 am

On December 15, 1930, tea mogul Thomas Lipton stepped into New York’s City Hall to collect a trophy. Mayor Jimmy Walker made the honors of giving the speech and presenting him with a silver cup.

The award wasn’t for winning a race, but for losing 5 of them. Months earlier, the avid yachtsman had lost his 5th and final challenge for the America’s Cup and in recognition of his sportsmanship, the beloved businessman and philanthropist was honored with a special trophy and declared “greatest loser”.

Before there was a Michael Dell, or a Conrad Hilton, or even a Henry Ford, there was Thomas Lipton, a name synonymous with a global brand.

Born in 1848 to an Irish family, Lipton’s greater-than-life story took him from the slums of Glasgow in Scotland to the upper echelons of the rich and powerful.

He built his fortune as a grocer and then as a tea importer and producer. By the end of the 19th century, Lipton had accumulated enough wealth and prestige to commission a racing vessel for the America’s Cup.

He christened his first racing yacht the Shamrock. As it turned out, there would be Shamrocks I to V over the next 30 years and Lipton would lose each of their five challenges for the world’s oldest international sporting trophy.

Some 128 feet long with a 25-foot beam, Shamrock I did well in local regattas off the waters of Great Britain but it was then beaten by J.P. Morgan’s Columbia at the 1899 America’s Cup.

Do you shop on Amazon? Support us at SPORTS HISTORY WEEKLY and click here to surf for ANY of your AMAZON products

Lipton challenged again in 1901 with Shamrock II, losing one more time to the defender, Columbia. He threw the sailing gauntlet a third time in 1903 with Shamrock III and fell behind Reliance, a vessel owned by Cornelius Vanderbilt III.

A gentleman sportsman at each race, Lipton became endeared to many Americans who came to associate the mustachioed yachtsman and his sailing cap with their cup of tea.

Lipton’s passion for sailing began when he landed work as a cabin boy on a steamer at the age of 15. But he left the sea and found himself in the U.S., roaming around and picking up odd jobs before taking a position with a New York City department store.

His imagination fired, he returned to Scotland with new ideas around advertising and merchandising and opened  ‘Lipton’s Market’. By 1890, the shrewd businessman owned hundreds of food stores across Great Britain.

Like today, yacht racing was as much a test of fund raising and management as it was skill in sailing and boat design. The catalogue of sponsors in the early years of the America’s Cup read like a who’s who list in the world of industry and finance.

Vanderbilt, Forbes and Morgan were among the most notable names and they all raced out of the New York Yacht Club. Across the Atlantic, it was mainly the Royal Yacht Squadron run by the blue-blooded establishment.

Despite his business success and reputation, Lipton was still a commoner in the eyes of Britain’s aristocracy and he was denied membership to the Royal Yacht Squadron, the sailing club that defended and lost the first America’s Cup challenge in 1851.

He joined the Royal Ulster Yacht Club in Northern Ireland from which he launched all five Shamrocks.

Managing the America’s Cup was akin to businessmen cutting a deal. The terms and conditions of each race- date, location, boat type- were (and still are) set by the defender and agreed to by a challenger.

Lipton had long pleaded for smaller-sized racing yachts, which he finally got for the 1914 challenge. The 75-foot Shamrock IV with her 21-foot beam was on her way to North America when World War I broke out and the chase was cancelled.

The Cup resumed in 1920 with great fanfare. It was Lipton’s 4th race in New York, a city where he was known and loved for his rags-to-riches tale and great works of charity.

The public remembered when his own private yacht, which he donated as a hospital ship to the Red Cross, was sunk by a German submarine during the war.

Sailing Shamrock IV was the closest he came to claiming the America’s Cup. He won the first two legs but was defeated in the last three by Henry Walters’ Resolute.

In 1930, the America’s Cup moved to Newport, Rhode Island where the water was cleaner and the wind better suited for racing. It would be Lipton’s final bid for the trophy with Shamrock V, one of the first of the J-Class boats, or single-mast racing vessels.

He ended up dropping four straight races against Harold Vanderbilt and his Enterprise. After the event, the railroad tycoon summed up the popular feelings for Lipton:

“In defeat lies the test of true sportsmanship, and he has proved to be a wonderful sportsman, quite the finest it has ever been our good fortune to ever race.”

Do you shop on Amazon?  Support us at SPORTS HISTORY WEEKLY and click here to surf for ANY of your Amazon products

But Americans wanted a different conclusion to the Lipton yacht-racing saga. It was Hollywood actor and newspaper columnist Will Rogers who suggested that New York City’s Mayor Jimmy Walker collect donations to buy a cup for the “world’s most cheerful loser”.

Support came from all corners of the country, including from President Roosevelt who sent in a donation and from an association of Utah miners who offered 50 lbs. of silver to cast the mug.

A living symbol of the bygone gilded age, the 82-year old now stood inside a packed room at City Hall ready to receive his unlikely gift. It was an 18-carat gold tiffany cup with carved shamrocks and a silver base.

An inscription read: “In the name of hundreds of thousands of Americans and well-wishers of Sir Thomas Johnstone Lipton Bart, K.C.V.O”.

Walker, whose corrupt administration would soon crumble, referred to the lovable tea magnate in his speech as “the greatest sportsman of our time, and the greatest loser throughout the history of mankind”.

Lipton returned home two days later, crossing the ocean for the last time. He had poured millions of dollars into the America’s Cup and helped put the race on the sporting map.

Though Lipton's lifelong quest for the trophy had eluded him, he finally earned entry into the Royal Yacht Squadron on the day of his 83rd birthday.

The esteemed Scotsman died six months later with no heirs, leaving his personal fortune to the city of Glasgow.