In a new class of boats, Americans continue to dominate a century-old race 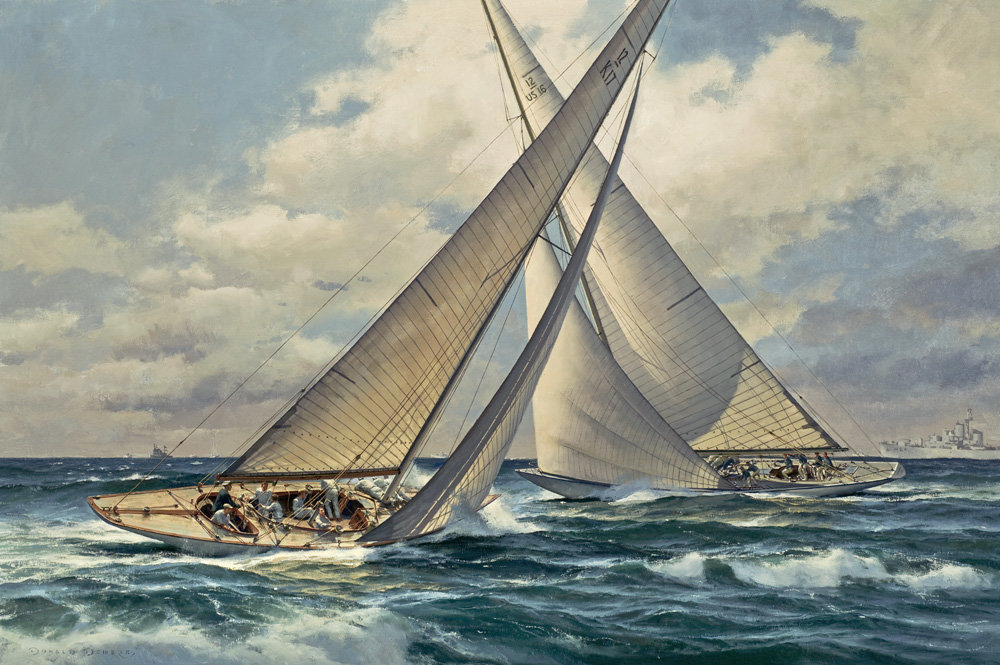 A rendering of the Columbia (right) sailing against the Sceptre at the 1958 Americas Cup in Newport, Rhode Island. Columbia won the race 4-0 in the Cup's first 12-meter class competition.
Posted Sunday, July 4, 2021 8:00 am

The year was 1958 and the America’s Cup held its first race in over 20 years, the longest gap between challenges in the history of the ocean-going competition.

The Royal Yacht Squadron (RYS), the challenger, launched their newly-christened Sceptre from the Scottish docks. The New York Yacht Club (NYYC), the defender, answered with the Columbia, a boat constructed on City Island in the Bronx.

In the waters off Newport, Rhode Island, Columbia ended up sweeping its rival 4-0.

In the 107 years since the schooner America first took the Cup and gave it her name, British boats tried and failed 16 times to win the ewer-shaped trophy, the oldest in all of international sports.

The RYS was just one of several yacht clubs that had thrown the gauntlet over the decades, but to no success. Americans had won each Cup challenge since the inception of the race in 1851.

In years past, the names of competing yachtsmen read like a who’s who list of business tycoons: Thomas Lipton and Thomas Sopwith from the British Isles, the Vanderbilts and Morgans from the U.S. But this time around, the names were new and even the boat design was different.

Following two decades that saw war and economic dislocation, a fresh group of British yachtsmen were once again looking to take up the challenge. A 12-man syndicate chaired by Hugh Goodson came together in 1956 to pool resources and build a vessel. They were comprised of navy veterans, military officers, lawyers, and titled peers.

After 5 failed attempts, some members of the RYS were skeptical of the whole idea of challenging again, but the call to restore British pride at the world’s most prestigious yacht race was enough to win over financial backers.

Do you shop on AMAZON?  Support us at SPORTS HISTORY WEEKLY by clicking here for ANY of your Amazon purchases

The press on both sides of the Atlantic was abuzz with the prospect of reviving the long-dormant America's Cup. The London Times even held a contest that awarded an all-expense paid trip to Newport for two lucky Britons. Sports Illustrated in the U.S. featured a special race preview on its September 15, 1958 cover.

The NYYC were winners of the previous 1937 series when Harold Vanderbilt’s Ranger defeated Sir Thomas Sopwith’s Endeavor II, 4-0. As defender of the Cup, they accepted the challenge and were led by their commodore, Henry Sears.

Unlike governing bodies that regulate competitions in global sports such as the Olympics and the World Cup, the America's Cup sits in a category of its own. The battle for seafaring supremacy is as much a test of fund raising and management expertise, as it is sailing skill and boat design.

Underpinning the framework for the Cup race is the original Deed of Gift, held in trust by New York’s Supreme Court. To date, the document has only been revised 3 times in the course of its storied history and it was Sears who led the charge to amend it for the first time.

Sears managed to reinstate the famed regatta in smaller boats. Yacht racing had always been a privilege of the rich, but post-war economic realities made the cost of building the J-Class racing vessels of the 1930s prohibitive. The ’12-Meter Class’ boats were now introduced to the America's Cup.

The 12-meters were used at the 1908, 1912 and 1920 Olympics. Typically, their length ranged from 65 to 75 feet and their single masts were roughly 85 feet high and sloop-rigged. Under the 12-meter formula, boats could experiment with new designs as long as the variables- sail size, waterline length, size of rudder, etc.- added to less than 12 meters.

On April 2, 1958, Sceptre came off the slip at Sandbank in western Scotland with great fanfare. An historic moment captured by newspapers and attended by foreign visitors, even the local schools were closed. Designed by David Boyd and built by Alexander Robertson & Sons, the white-hulled vessel was described to be “as beautiful as she is fast”.

Across the Atlantic, Olin Stephens designed the Columbia, which rolled out of the Henry Nevins boatyard on City Island in the Bronx. A master boat constructor, Nevins built custom race crafts that won more competitions than anyone in the industry. During the war, Nevins supplied minesweepers to the U.S. navy.

Stephens, born in the Bronx, had apprenticed at Nevins before becoming one of the most famous yacht designers of the 20th century. His prints were behind 6 of the 7 successful 12-meter defenders of the America's Cup between 1958 and 1980.

Over the summer of 1958, Columbia was put to test trials against 3 other boats for final selection to the Cup series that was scheduled for September. Beating out Weatherly, Easterner, and the older Vim that was designed by Stephens as well, she was chosen to defend the America's Cup.

Though Sceptre took to the wind and water weeks ahead of Columbia, her only serious sparring partner back home was Elaine, a 12-meter that was defeated by Vim in a race before the war. Entering the contest in Newport, Sceptre’s winnability factor was unknown.

Do you shop on AMAZON? Support us at SPORTS HISTORY WEEKLY by clicking here for ANY of your AMAZON purchases

Nevertheless, while the two competing sloops were somewhat similar in over-all length (69 ft), mast height (80 ft), and sail area (2,000 sf), Sceptre was expected to perform better in strong breezes and choppy seas, since she carried a full-bodied hull and was heavier by 5 tons.

On September 20th, some 10,000 onlookers showed up on land and in pleasure boats to witness the beginning of the 24 nautical mile race. Among the spectators were President Eisenhauer and his wife who were seated on the destroyer, USS Mitscher.

Columbia was skippered by Briggs Cunningham, a sailor as well as an auto racing pioneer who was the first to drive an American car at the 24 Hours of Le Mans. On board as members of the racing team were Stephens as relief helmsman and Sears as navigator. Sceptre was captained by Graham Mann, a sailing competitor who won bronze at the 1956 Olympics in Melbourne.

Under light winds in a winward-leeward course, Columbia won the first day with a time of 5:13:56, defeating Sceptre by 7 minutes and 45 seconds. The second day saw Sceptre struggle with her spinnaker, causing her to lose the triangular course by 11 minutes and 42 seconds.

The third day once again failed to bring success for the challenger, which lost by 8 minutes and 20 seconds under firm wind that should have played to her advantage.

The 4th day played against the hapless Sceptre as she suffereed from mishaps, including a poor start and a broken boom. Still, a gallant crew was determined to complete the contest and they fell behind by only 7 minutes and 5 seconds.

Sceptre’s heavy defeat resulted in great disappointment across the Atlantic where hopes for victory on the waves were once again dashed. A combination of factors was cited for her underwhelming results, including inadequate test trials at home.

For the U.S., superior yacht design and masterful skills against the wind were proven once again in a new class of boats. Americans would keep defending the Cup successfully with the 12-meters until 1983 when the Royal Perth Yacht Club sailed the Australia II to victory, putting an end to the NYYC’s 132-year reign.