A shoeless Ethiopian wins the marathon at the 1960 Olympics 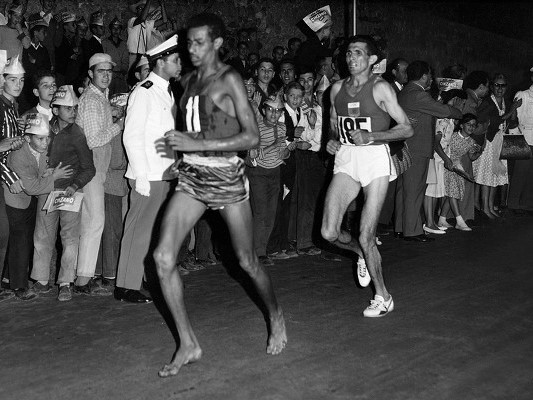 Abebe Bikila running barefoot at the 1960 Olympics in Rome. The Ethiopian native took gold in that race, crossing the finish line in a record time of 2:15:16.
Posted Saturday, November 4, 2017 12:00 pm

A shoe-less African running through the streets of Rome resembled a scene closer to the time of slaves and gladiators than the espresso-sipping, modern day Italy. But the spectators who lined up to watch the marathon race at the 1960 Olympics in Rome were treated to just that, an unknown barefoot Ethiopian racing through their ancient city to win the gold medal.

By the time he finished the event, this son of a shepherd from east Africa was transformed into an international athletic sensation.  Abebe Bikila was a soldier in the Ethiopian Imperial Guard, a unit entrusted with protecting the country’s ruler, Emperor Haile Selassie. His running abilities were spotted by a Swedish coach employed by that country's government.

Having run and trained barefoot in Ethiopia, Bikila found a new pair of running shoes uncomfortable for his first European marathon. The 29-year old therefore resorted to pounding the cobblestone streets of the Italian capital with the soles of his feet.

As darkness descended over the city, Bikila and Moroccan long-distance runner, Ben Abdesselam, had already dispatched the rest of the field. The two rivals were left struggling for primacy when the Ethiopian broke away 500m ahead of the finish line, winning by 25 seconds.

Bikila ended up becoming not only the first sub-Saharan to win gold in any Olympic sport, but he also clocked the 42km event in a record time of 2:15:16.

Later years saw other Olympians try to conquer the ground barefoot, including Singapore's P.C. Suppiah at the 1972 Munich games, England's Zola Budd at the 1984 Los Angeles competitions, and Kenya's Tegla Loroupe at the 2000 Sydney tournaments. But none came close to winning a medal at any of the quadrennial events.

Four years after Rome, Bikila went on to claim the same race at the Tokyo Olympics, cutting his old record by 3 minutes but this time with his feet covered. The Ethiopian road master became the first athlete to successfully defend an Olympic marathon title.

East German Waldemar Cierpinski is the only other Olympian to claim back-to-back marathon gold, in 1976 and 1980.

Bikila participated in 15 international marathons, winning 12 and finishing 5th at the 1963 Boston Marathon. He ran barefoot for a second and last time in 1961 in Athens, winning the contest in 2:23:45. The Ethiopian legend never hit the streets in New York since that race only got going in 1970.

The 50th anniversary of Bikila’s barefoot performance was made that much more special when another Ethiopian, Siraj Gena, placed first at the 2010 Rome Marathon. In honor and memory of his country’s hero, Gena removed his shoes in the last 300m of the race and cleared the finish line in 2:08:39.

Bikila’s last race was at the 1968 Olympics in Mexico City, though he dropped out due to injury. Fellow Ethiopian Mamo Wolde carried the day to win gold, adding to their nation a third consecutive Olympic title.

Tracking the history of long-distance runners, Bikila had paved the way and served as an inspiration for the Ethiopians and Kenyans who came to dominate today’s marathon races.

In a cruel twist of fate, the dual-gold athlete was left paralyzed following a car accident in 1969 and died four years later. The car he was driving was a gift from Ethiopia's emperor Haile Selassie in recognition of his achievements.